You need something religious and don’t have a priest available???

You go ONLINE of course and then the question becomes!

To Online or Not to Online with Priests!

I know, I know, you are told that you need to be careful with online priests, and some folks  still lose thousands online yadda yadda yadda— but… the price was ohhhhh so right!  You can save a few bucks right?  In the zest of saving money, hasty decisions can be made and I wanted to remind this community first of the dangers of crazy online priests and I would like to offer an example.

Being that we have a Facebook Online Community, I get a bunch of requests to join our Orisa Wisdom community... and based on this particular person’s responses to the entry questions… I decided to reach out to him to ask him some  additional questions of my own.

Just like the song says – it all started so innocently…

Not going to bore you with all of the conversation, but will mention some key points.

He asked me which Orisa I wanted.  I told him Oya.

He told me that he could give her to me.

He told me that yes I would be a priest of Oya once I receive her, and to remember that once I bring her home with me, that I have to go back to Africa to initiate.

He said yes, but you still must come.

He told me that once I get Oya… that I would get unimaginable riches and the money to come to Africa would come.

He said that once I get there (to Africa) that they would do a reading to determine what Orisa it is that I get.  I’m like… but wait, you said that you’d get me Oya first and that I would be her priest, and now you are saying that I have to go to Africa to be her priest??????

He said that he could give me any Orisa that I wanted as he is a keeper of all of them, because he is a babalawo of Ifa.  He told me that I could buy anything that he was a keeper of.

First I can get whatever Orisha I choose, but then I would have to fly to Africa to see if that is the Orisha that I can get, after I paid and received said Orisha?  (Scratching my head…)

Let’s think about this for a minute…  What started out as I can get an Orisha for less than $300… turned into a trip to Africa, with multiple initiations, and multiple things that can only be determined while I’m there… and I can get it all done…. in one week? ———–    I don’t like surprises (unless it’s Christmas, Mother’s day, anniversary and my birthday)…… especially none that have to do with my bank account.

He gave me his prices (which I have to say ARE VERY ALLURING)… and even the initiation price is alluring….

Keep in mind, that this is the reason WHY we ask all to be CAREFUL….

He was willing to sell me via mail an Orisha (Oya) even when I told him in that conversation that I am not an initiate.

Here is a message to those just entering the traditions….   The Aleyos and Aborishas

I know that you are hungry for information and for this faith... I know.  I totally get it and I get you…..  I know that you are ready to “insert religious ceremony here” and that you would make it happen… believe me, I know….  I was there…. right there with you….. but here is a message from someone who chose to wait….

There is no power in getting a pot or tupperware of “insert sacred items and stuff here”… it one hasn’t undergone the sacred ceremony for that.  Why would you want that anyway? YOU are worth MUCH MORE!!!!   There is much to speak of ‘The Process”... of the wait, the choosing, the training, the many readings that happen before an initiation, the blunders, and funny moments, the bonding with your godparent, and the experience of having paid your price to go to the foot of Orisa….

I’d like ALL to be aware and know…. that All that Glitters Isn’t Gold…..

What is quick and easy… is hardly the right way.

I had to wait 20 years before coming to the foot of  Orisha to receive that Ase on my head…. and I’m grateful for that.

Don’t Rush the Process — it is actually a beautiful one if you have the tools to navigate and if you choose well.

Are you dealing with an online priest?  Check out this related post all about how to recognize scammer priests….  Click on the image below or on this link…

Would you like to connect with your PERSONAL ORISA & change your life?

Click here and learn how to put this to use TODAY and change YOUR LIFE!

WE hate Spam and would never dream of selling your info to anyone!

Thanks in advance for joining the Orisha Wisdom Community! 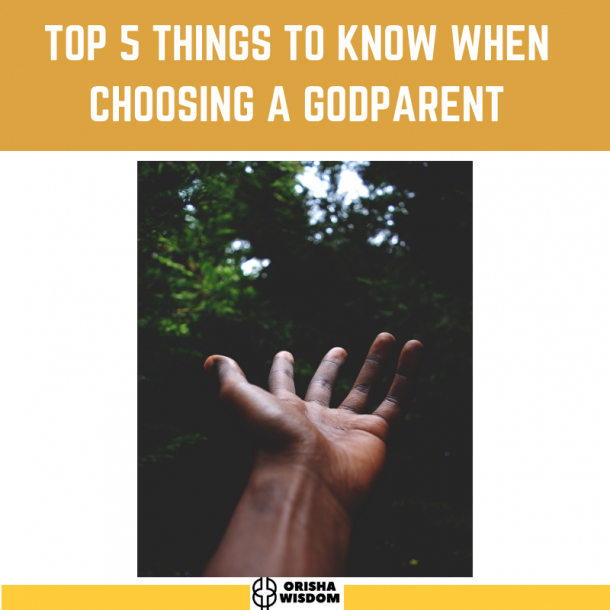 Making a Good Choice starts with having Good Information.

A Godparent is a Choice...  Let this Guide help you and give you a Great Start!

Woo hooo! Check your email folders... and you should have your Guide waiting for you!

Your info is safe with us.  We will not share your info with anyone.  AND we totally hate Spam!

THIS IS JUST AN SMS TEST

A Godparent is a Choice...  Let this Guide help you and give you a Great Start!

Woo hooo! Check your email folders... and you should have your Guide waiting for you!

Your info is safe with us.  We will not share your info with anyone.  AND we totally hate Spam!

Have a Question that you'd like to ask an Orisa Priest?

Get your question in... AND it might be featured in The Orisha Wisdom Podcast!

We hate SPAM and we wouldn't dream of it or to give your information to anyone else.  Thank you in advance for joining our Orisha Wisdom Community!

Find out what our Yoruba Traditions have to say about male and female roles, dating, and much more with this workshop.  Huge thanks to Baba Falade for blessing us with his wisdom!

We hate SPAM and we wouldn't dream of it or to give your information to anyone else.  Thank you in advance for joining our Orisha Wisdom Community & enjoy your BONUS!

Join our Orisha Wisdom Community AND get these Orisa Affirmations as a Thank You!

By joining our community, you will be in the know of Orisa Traditions topics, and never in a spammy way! Enjoy your Orisa Affirmations!

Ready to learn about Orisa?

Find out if Aleyos 101 is for you... by participating in one of the weekly Group Calls that are ONLY for the existing participants.  Take this Opportunity, learn, and participate...

You are now registered for the Aleyos 101 Group Call! See you then!

We hate SPAM and we would not dream of it or to give your information to anyone else.  Thank you in advance for joining our Orisha Wisdom Community & enjoy your Special Guest Access to our Aleyos 101 Group Call!